Under lockdown most Brits have made use of their daily outdoor exercise allowance, but what effect has this had on the market for home gym gear and clothing, and will Britons return to their gyms after lockdown ends?

The single session of outdoor exercise afforded to Britons under the lockdown became an integral part of the daily routine for many – for some it was an excuse to get out of the house while for others it was a replacement for the gym. Over 70% of Brits say they have taken some form of exercise during lockdown, so has the sector for sports goods weathered the storm better than others we have examined recently?

Purchasing intent for sports equipment is on par with 2019

Despite fairing better than the likes of the alcohol, clothing and dining industries, the sports equipment and clothing sector has still taken a knock in light of COVID-19. The number of Britons saying they are likely to purchase sporting goods in the next 30 days has fallen compared to last year, reaching its lowest (14%) the week after lockdown came into force. This represents a 10 percentage point loss compared to week 8 of 2019 (24%). 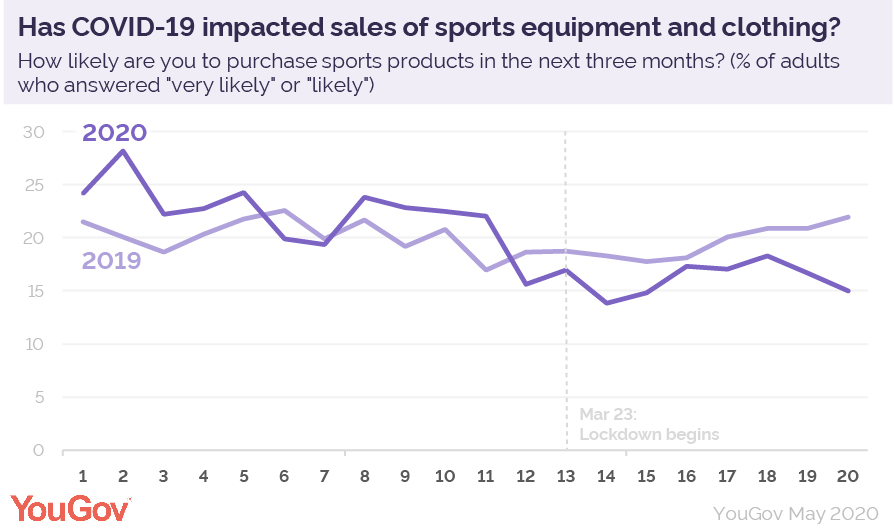 However in the six weeks that have followed, the purchase intent for sports goods has fluctuated but in recent weeks the gap between 2020 and 2019 has never been higher than week 20 (7%).

What exercise are Britons doing?

What’s driving this continued purchasing of sporting goods, though? YouGov research shows that 74% of Britons say they are exercising more often during the lockdown. While the majority of this consists of Brits popping out for a walk (55%) many others have increased the amount of more active sports and forms of exercise they do. 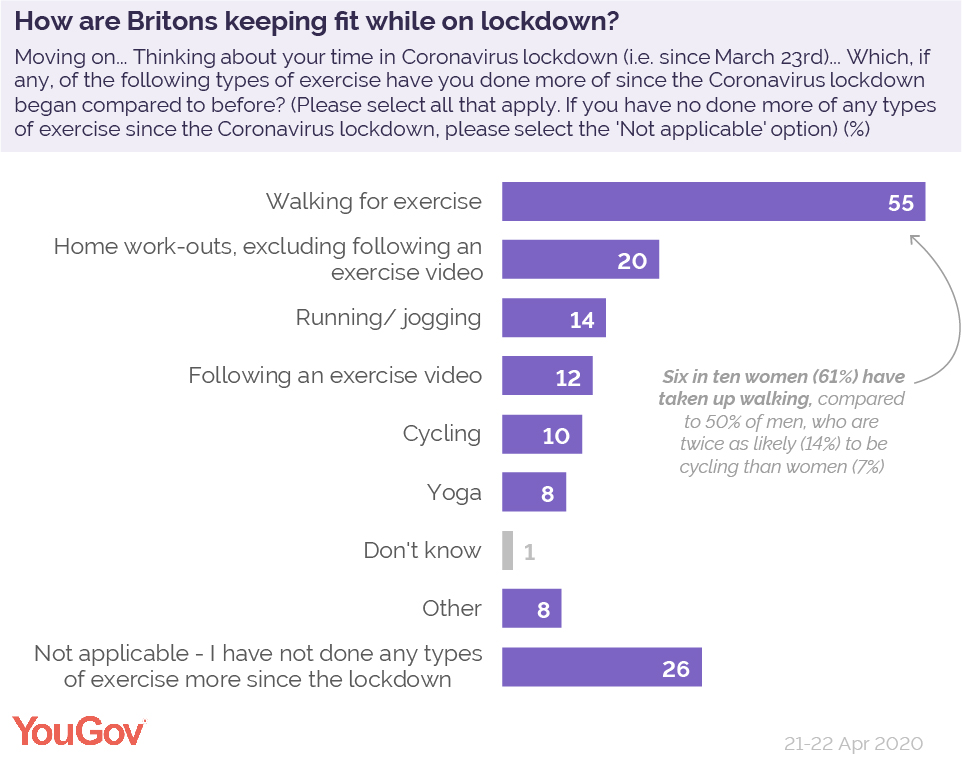 One in five (20%) are doing their own home workouts,  and 12% are keeping fit with the likes of Joe Wicks and Mr Motivator’s home exercise routines. One in six (14%) are running and jogging more, and 10% of Brits have turned to more cycling.

Brits aged 18 to 24 are most likely to be keeping fit: two in five (41%) are doing home workouts, nearly the same number (39%) are running and jogging, and 21% are cycling more than they previously were.

What impact has this had on sales of clothing and equipment specifically?

With younger Brits the most likely to be working out and exercising during the lockdown more than previously, has this trend impacted their consideration of individual sportswear brands? YouGov Plan and Track data shows that the most popular sportswear brands in the UK have all seen a boost among young adults since lockdown began. Nike, for example, saw a big increase in its Consideration score, peaking with a score of 76 in early May – an increase of 18 points since March 23. 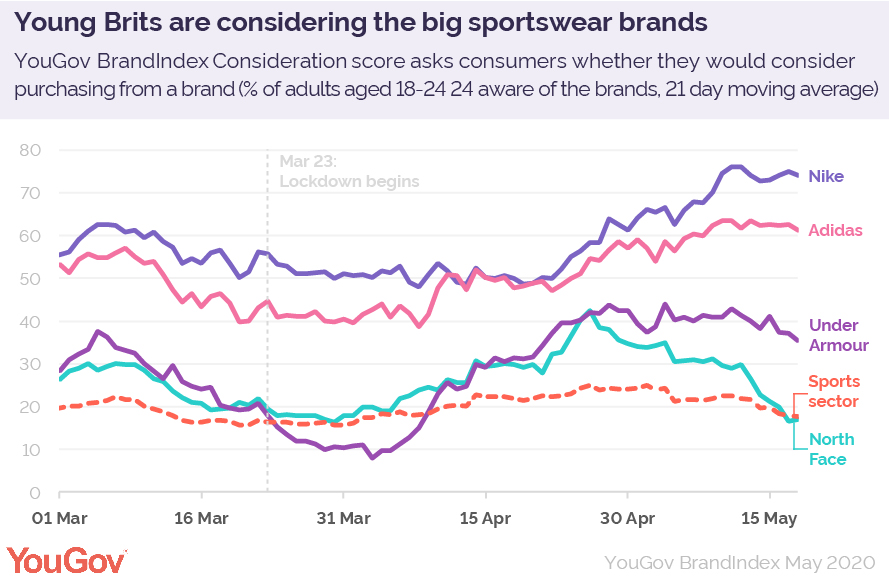 This improvement is not limited to Nike, though. Adidas sees similar improvements, adding 16.5 points to its Consideration score since lockdown began and Under Amour’s score has increased by 17.6 points in the same time frame.

North Face has also seen a large spike in purchase consideration by young adults, peaking at 42 in late April. However it has since returned to levels comparable to before the lockdown began.

How have retailers selling sports equipment and apparel fared during the pandemic? Sports Direct attempted to remain open during the initial days of the lockdown, arguing that with gyms closed sports retailers were essential. However, Britons do not believe sports retailers are an essential service, with only 3% of adults saying they are and 95% believing they are not. 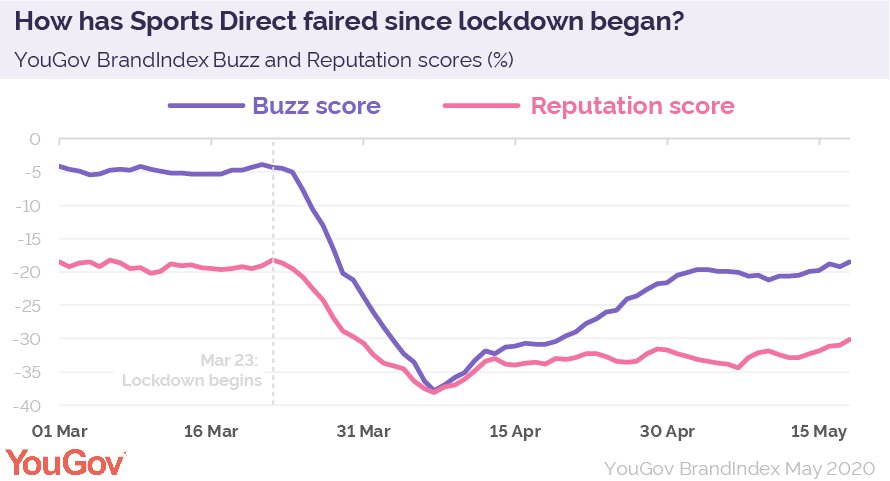 The backlash against Sports Direct saw serious damage to a range of brand health metrics, which have still not fully recovered. Its Buzz score crashed from -3.9 to -44.0 in the first week of lockdown, and while it has recovered since then the brand’s buzz score is still well below pre-lockdown levels at -18.5%.

Interestingly, consideration of the brand has also dropped, but only by 4.4 points since lockdown began. This could indicate that consumers are still willing to think about a purchase despite the high degree of negative buzz surrounding the brand.

Have dieting and weight loss brands benefitted as well?

With Brits stuck at home, cooking for themselves, and taking the opportunity to exercise, some are looking to use the lockdown as a time to lose weight. Assessing the Index scores (a net measure of brand health from other YouGov BrandIndex Metrics where a score of zero means equal positive and negative feedback) shows that Slimming World is doing particularly well among the weight loss brands. 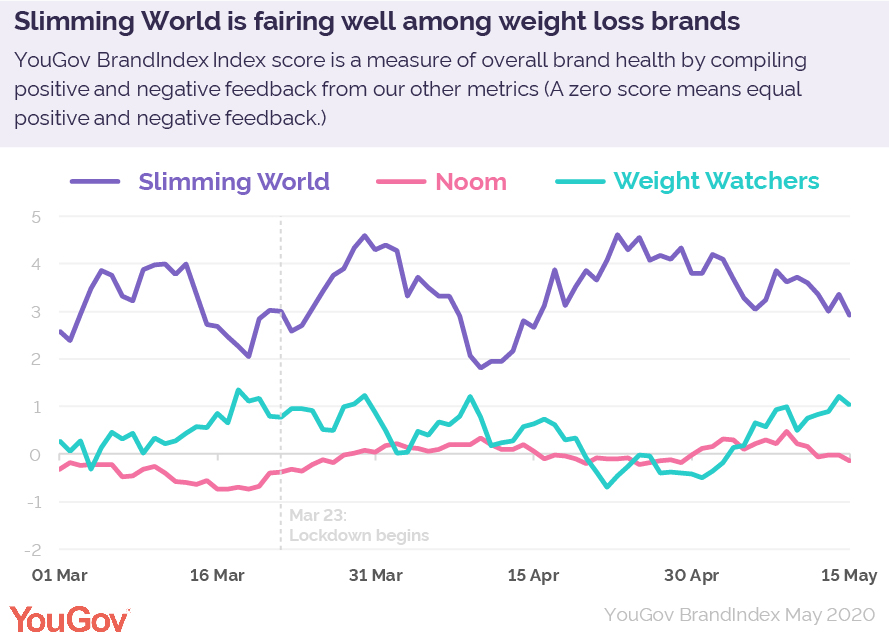 Looking deeper, this change seems to be driven by women aged between 35 and 49. Among this group Slimming World’s Index score rose from 0.4 on the 19th of March to 14.8 on the 8th of April – this is despite the brand seeing a reduction in its ad awareness scores.

Looking to the future

All the data we have examined here points to a bit of a health craze among Britons. However, our data suggests that Britons won’t be rushing to renew their dusty, long-forgotten gym memberships when the rules are relaxed. 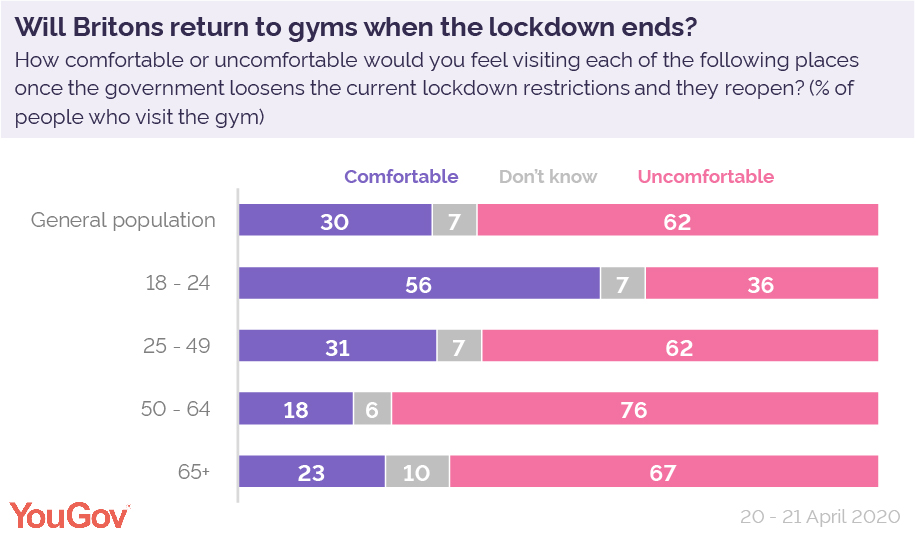 Six in ten (62%) gym-going Britons say they would feel uncomfortable returning when lockdown comes to end, compared to 30% who would be willing to work out there.

The numbers are reversed for younger British gym users. Among 18 to 24 year olds – the group most likely to be exercising more at home too – 56% would be comfortable returning to the gym, with 36% being uncomfortable.