Skip to content
Seven in ten support equal coverage for women’s sport, but not at the cost of men’s coverage

Seven in ten support equal coverage for women’s sport, but not at the cost of men’s coverage With one of the themes of International Women’s Day 2020 being gender equal sports coverage, we at YouGov asked the British public how they would feel about seeing as much women’s sport as men’s.

In principle, the British public is overwhelmingly supportive of equal coverage. Almost seven in ten Britons (69%) support equal media coverage of men’s and women’s sport, with just 15% opposed. Women are slightly more supportive than men, at 72% to 66%. Close to one in five men (18%) are opposed to equal coverage, compared to only 5% of women.

However, in practice, support for equal coverage is less clear cut. Only a quarter (26%) want to see more women’s sport coverage even if it means less attention given to men’s sports. Around the same proportion (24%) think an increase is only acceptable if it doesn’t affect the men’s sports coverage. 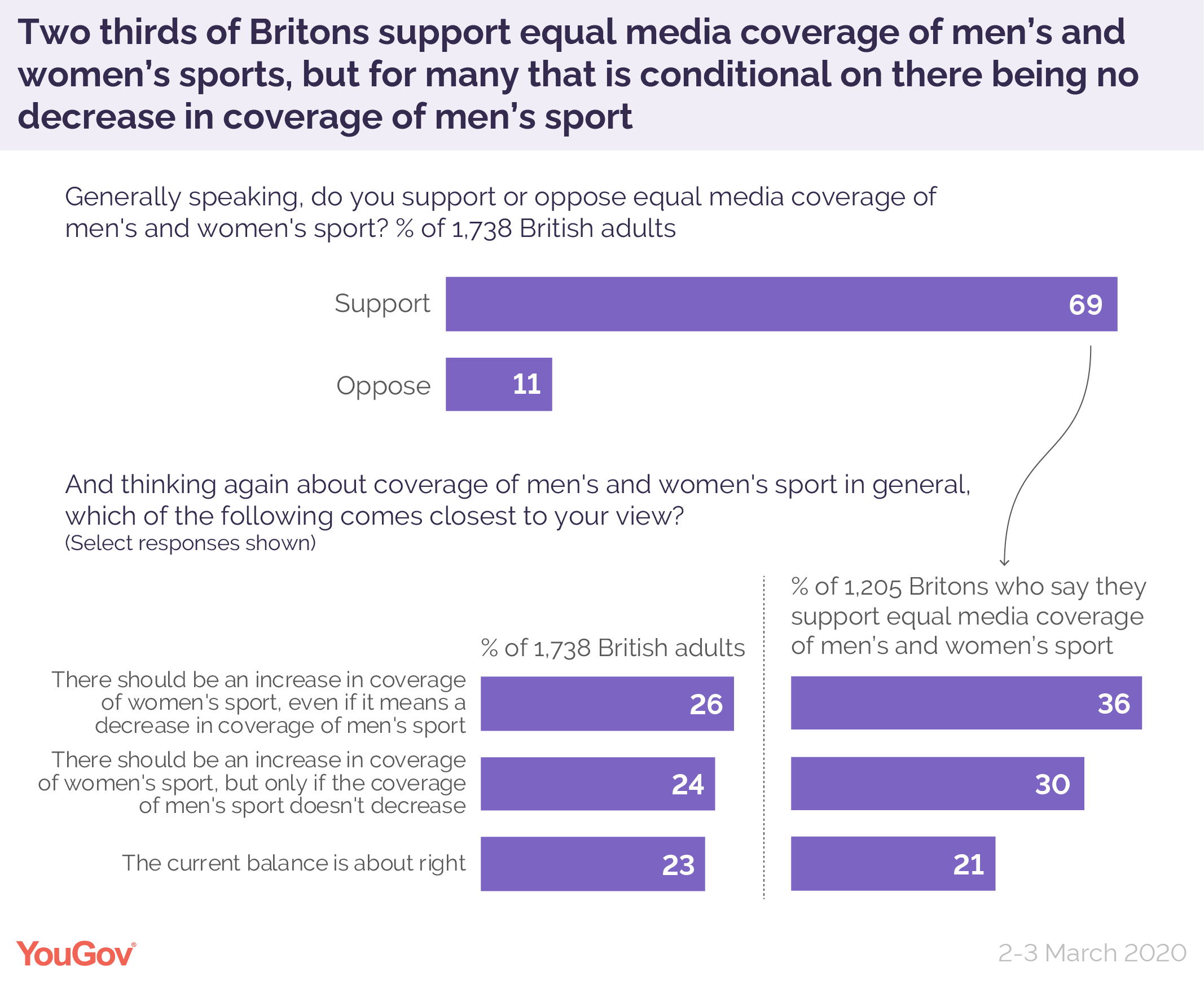 A further 23% think the current balance in men and women’s sports coverage is about right, including 25% of men and 21% of women.

Even among those who said they supported equality in sport reporting, only 36% would countenance it if it meant less men’s sport being broadcast. Three in ten (30%) only support an increase if men’s coverage is unaffected, and another 21% believe that men’s and women’s sport already receive equal coverage.

Interest in watching women’s sport is on the up, and it is rising fastest among men

Regardless of whether or not they support equal coverage, most Brits (72%) believe that women’s sport is receiving more airtime than it has previously. At the same time, 53% think the quality of such coverage has gotten better as well.

In fact, interest is growing most quickly among men – 24% say they are now more interested in women’s sport, compared to 14% of women. 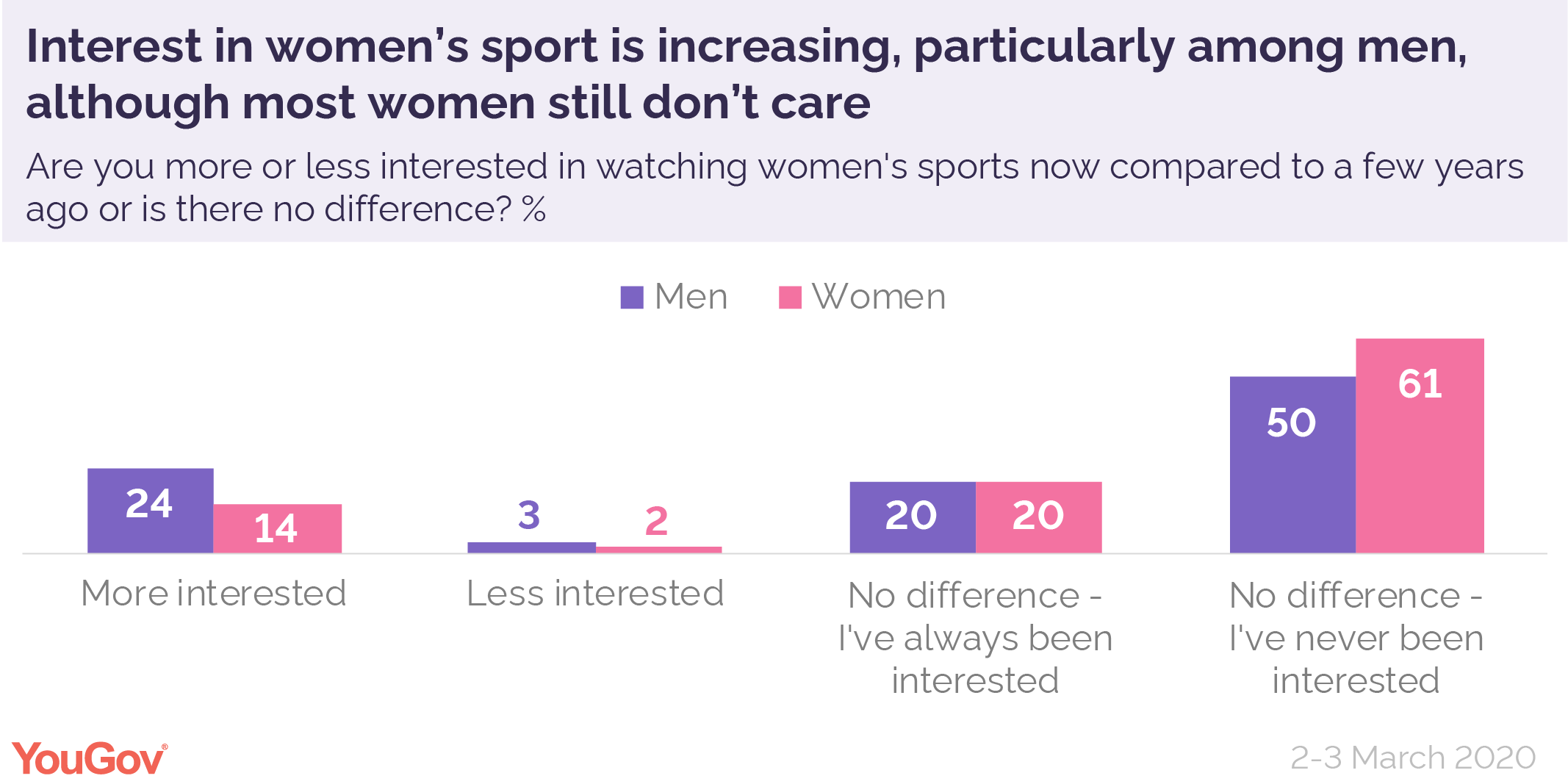 Nevertheless, most Britons (56%) say they remain uninterested in watching women’s sport – a figure that is higher among women (61%) than men (50%).

What women’s sports are Britons watching?

Of the 12 sports we asked about, women’s rugby lagged furthest behind its male counterpart, with only 11% of Brits saying they ever watch the women’s game, compared to 42% who said the same of the men’s game. 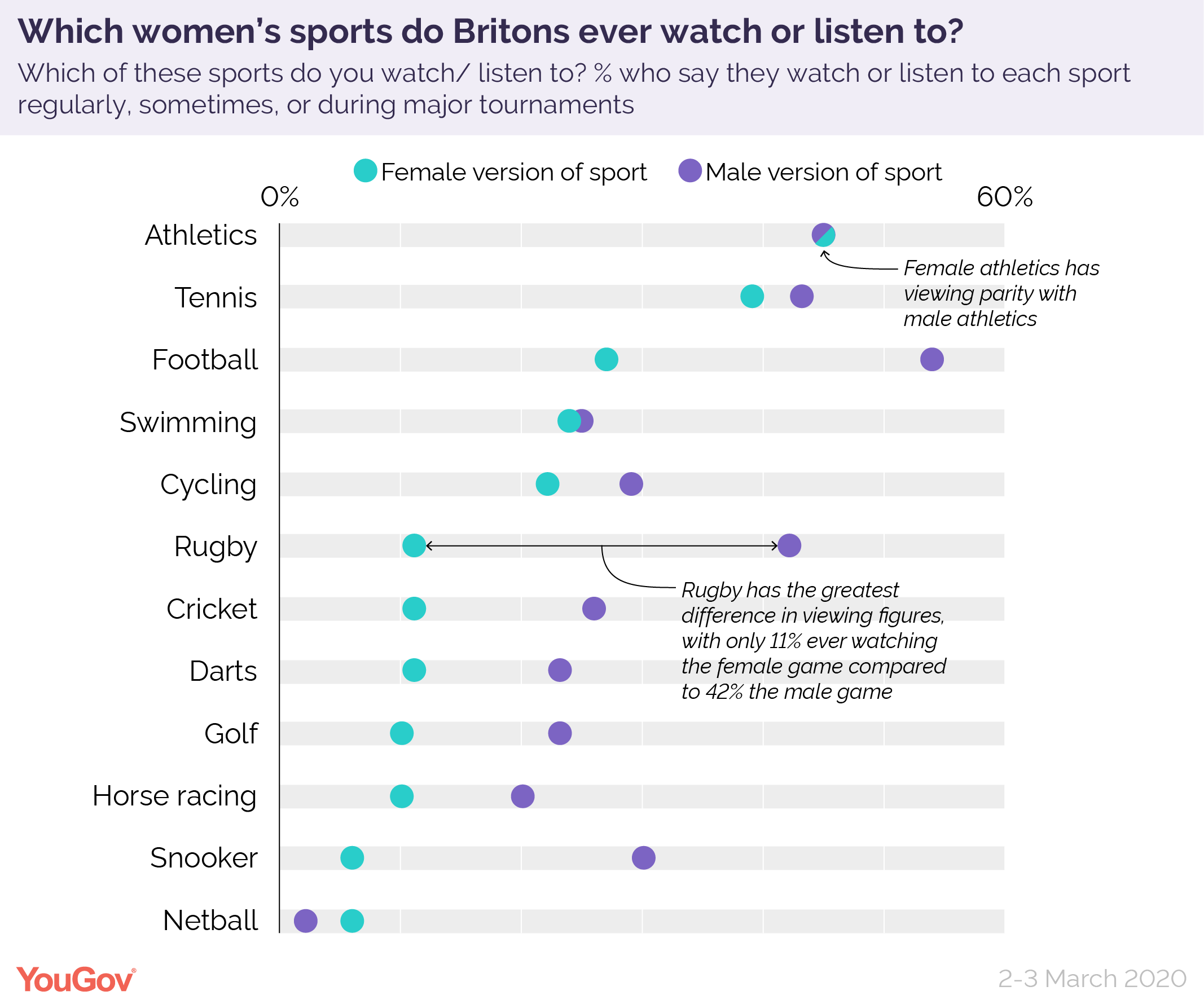 Women’s athletics, tennis, cycling and swimming are seen as being as good as the men’s games, but women’s football, cricket and rugby have furthest still to go

One barrier to greater acceptance of women’s sport is the belief that it is not played to the same skill levels as the various men’s versions.

Men’s football is the most watched sport in Britain, with 54% of Brits saying they tune in at least occasionally. While the Women’s World Cup last year received widespread coverage and interest in the game is growing, 66% of those who have watched both men’s and women’s football still believe that the quality of the men’s game is better. Only 18% currently feel they’re about the same.

The figures are more positive when it comes to athletics, however. The second-most watched sport we asked about, almost three quarters (73%) of Brits believe that the quality of the male and female events is about the same.

Aside from football, the female versions of cricket and rugby also have furthest to go in terms of quality, with 69% and 67% thinking the men’s games are better.

Netball is the only sport where viewers think the quality of the women’s tournament is better (60%).